We often misread scripture because we don’t study it carefully, are predisposed to simply accept the interpretation of an ecclesiastical leader, do not read it in context, or fail to consider the culture and beliefs of the original audience. And sometimes, it’s a combination of all of these. Such is the case, I believe, regarding Christ’s response to the question: Is it lawful to pay taxes to Rome? (Matt. 22:15-22 NASB):

15 Then the Pharisees went and plotted together how they might trap Him in what He said. 16 And they sent their disciples to Him, along with the Herodians, saying, “Teacher, we know that You are truthful and teach the way of God in truth, and defer to no one; for You are not partial to any. 17 Tell us then, what do You think? Is it lawful to give a poll-tax to Caesar, or not?” 18 But Jesus perceived their malice, and said, “Why are you testing Me, you hypocrites? 19 Show Me the coin used for the poll-tax.” And they brought Him a denarius. 20 And He said to them, “Whose likeness and inscription is this?” 21 They said to Him, “Caesar’s.” Then He said to them, “Then render to Caesar the things that are Caesar’s; and to God the things that are God’s.” 22 And hearing this, they were amazed, and leaving Him, they went away.

This story is frequently used in our church to reinforce the 12th Article of Faith, reminding us of our obligation to honor and obey the law no matter where we live.[1] On other occasions it is invoked to reinforce the principle of tithing: not only must you pay your taxes, you also are expected to remit what is due to the Lord.[2] And sometimes it is employed to draw a distinction between the temporal and the spiritual, the former being the province of domestic rulers, the latter belonging to God.[3] While those may be valuable teachings, they are not, I believe, the message Christ was trying to convey.

The first thing we overlook is the deep significance of the set-up line: the intention of the Pharisees to pose a question to Jesus for which there is no safe answer. To a limited extent, we understand his predicament: either he must endorse submission to the unpopular poll tax or commit an act of subversion by encouraging the people to defy Roman law.

But what we fail to see is that each of our customary explanations result in Christ consenting to—no, actually encouraging—the payment of the tax. This is not what he said. If he had, the Pharisees would have said “gotcha,” his credibility would have been shot, and many of his disciples would have abandoned him. We miss this because we don’t appreciate how loathsome—both politically and religiously—these taxes were to the Jews.

First, these assessments were terribly onerous, rendered all the more burdensome when Rome’s vassals, the Herodians, harvested their share. By some estimates, they totaled approximately 49% of an average family’s annual income.[4]

Second, they constituted tribute not just to a foreign ruler, but to a foreign God. Beginning with Caesar Augustus (some historians say Julius Caesar), each of Rome’s emperors was deified and worshiped, as exemplified by the denarius handed to Christ, upon his request, by his interlocutors. 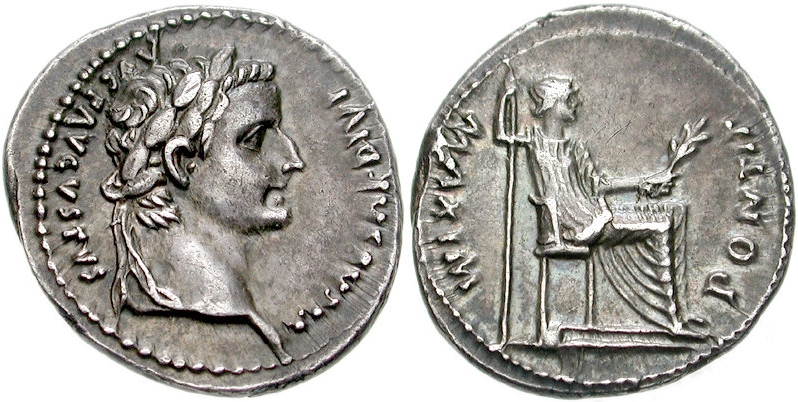 The front of the coin features the profile of Tiberius along with the Latin inscription: “Caesar Augustus Tiberius, son of the Divine Augustus.[5] On the back are the words “High Priest” which surround Pax, the Roman Goddess of Peace. All of this flew in the face of the first and greatest commandment given to Israel: “Though shalt have no other Gods before me!”

So, it is inconceivable that Christ would have advised his audience to pay this tax, that he would have tacitly acknowledged the primacy of Tiberius’s authority. As one scholar put it: “Anyone leading the kingdom of God movement would be expected to oppose the tax, or face the ridicule and resentment of the people.”[6]

But he didn’t tell them not to pay it either.

Such a statement would have been treasonous, resulting in his prompt arrest and imprisonment, if not execution. Just 25 years earlier the sons of Judas the Galilean had led a bloody revolt throughout Judea against the poll tax,[7] and the Romans were not about to allow that to happen again.

In reality, the Savior never answered the question put to him. Instead, relying upon a common tool of rabbinic instruction, he embedded his response with a question of his own, which is found in his concluding words, “render unto God the things that are God’s.” With this statement he was presenting a rhetorical question: “What things do belong to God?” A first-century Jew—someone well versed in the Old Testament—would have instantly known the answer:

“Behold, to the Lord your God belong heaven and the highest heavens, the earth and all that is in it.”

“The earth is the Lord’s, and all it contains, The world, and those who dwell in it.”

Nothing belongs to the Roman emperor or to any of us for that matter. It is all the Lord’s. Instead of ensnaring Christ, the Pharisees and the Heordians have fallen into his trap. He has turned the tables and implicitly asked: “You tell me what belongs to God and what does not?”[8] They had no response. This is why “hearing this, they were amazed” and skulked away. If he had simply conceded that the tax must be paid, would they have been astonished by what he said, rendered speechless?

At the same time, Jesus’ words distance him from those who oppose yielding to Roman authority. Instead, the inclusion of “giving to God the things that are God’s” relativizes the political obligation to the Romans. In other words, there is no firm principle of loyal submission to the state. Rather, there is an implicit reservation regarding our allegiance to an earthly government, but our devotion to the Lord should be absolute. While obedience to God may, as in the case of paying taxes, coexist with the demands of government, our obligation to the Father surpasses our fealty to any temporal realm.[9]

Thus, when God’s requirements do not conflict with those of a terrestrial ruler, then both authorities can be satisfied. But when they are at odds, then we are confronted with the imperative of weighing the demands of each sovereign.

Was it right for the Jews to yield to the emperor’s taxation but equally correct for the American Colonists to rebel against the levies of King George III?  Should Rosa Parks have refused to give up her seat on the bus to a white passenger, an act that violated local segregation laws and resulted in her arrest, or was her defiance justified?

Or consider young Helmuth Hübener, a third-generation Mormon, born in 1925 in Hamburg, Germany, who, as a teenager, along with two friends, opposed the Nationalist Socialist government by publishing anti-Nazi leaflets and engaging in other subversive activities.

His insubordination, however, was not confined to the secular authorities; rather, he openly defied the ecclesiastical leadership of his church.

At the direction of church leaders in Salt Lake, mission presidents in Nazi Germany were counseled to find a way to “get along” with Hitler’s government. Consistent with those instructions, they reminded the saints in Germany, Austria and Switzerland of their obligation to uphold the law and support the “powers that be” in accordance with the Twelfth Article of Faith.[10]

Hübener’s conscience, however, would not allow him to submit, a decision for which he paid dearly. In February 1942, he was arrested by the Gestapo on charges of treason.  Shortly after his arrest, he was excommunicated by the church he loved.[11]

A few months later he was found guilty of treason and sentenced not only to death but also stripped of his civil rights, giving his guards the power to torture and abuse him with impunity. Finally, in October of that year he was beheaded by guillotine, becoming the youngest person, at age 17, to be executed for opposing the Third Reich.

Lastly, let’s not forget Jesus himself who, on occasion, defied both the ecclesiastical and political authorities of his day. He openly rejected, for example, Sanhedrin and Pharisaic teachings on Sabbath day observance and interacting with the “unclean.” Further, his eviction of the money changers, while perhaps nothing more than disturbing the peace in our eyes, was a blatant act of insurrection in the eyes of the Romans, who had witnessed more than one Jewish uprising begin on the Temple grounds. That single act, more than any other, may have led to his crucifixion.

Perhaps his Father had the toughest choice of all: allow his beloved son, a man without blemish, to shoulder all the misdeeds, transgressions and evil choices of his other children in exchange for the mere hope they will embrace his gospel. Knowing this, perhaps I should try a little harder.

[11] Four years after his death, a new mission president assigned to the region posthumously reinstated Hübener into the church, albeit on procedural grounds since his excommunication did not follow established procedure.

2 thoughts on “When Caesar and God Collide”